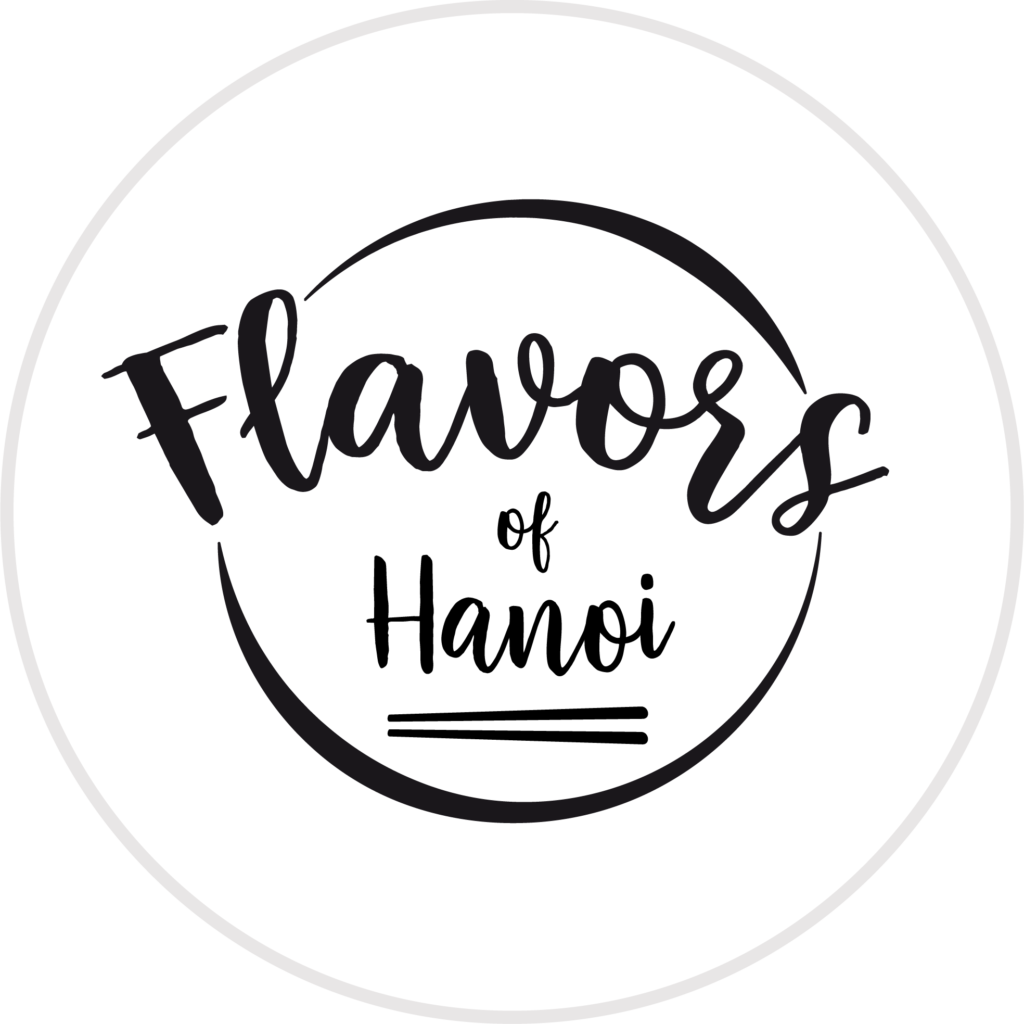 Located in the southeastern corner of the French Quarter, the ‘Maison Vie’ is a renowned French gastronomy dedicated restaurant, and a recommended place for Hanoi’s French cuisine lovers. With a mammoth approbation for the French food, Maison Vie Restaurant happened to be one of our preferences.

Our most recent visit to Maison Vie was with an Overseas Adventure Travel’s group, we were on a dinner-on-own day of their post trip, and they were all ready for a break from pure Asian foods. Since this restaurant was just three minute-walk away from our hotel – Sunway Hotel, we decided to go for a French meal. 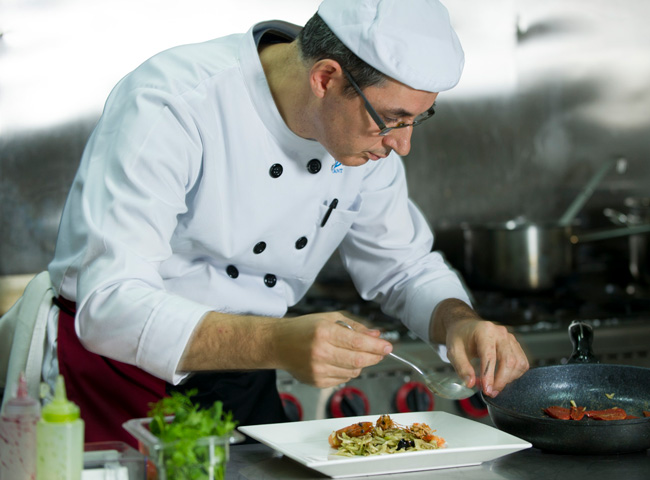 The exterior of the restaurant is like a neoclassical French colonial three floors mansion, with a stately stair leading to the entrance. On the inside, a mix of grandiose white background, with a palette of violet and golden furniture, defines the establishment’s 19th century themed interior. 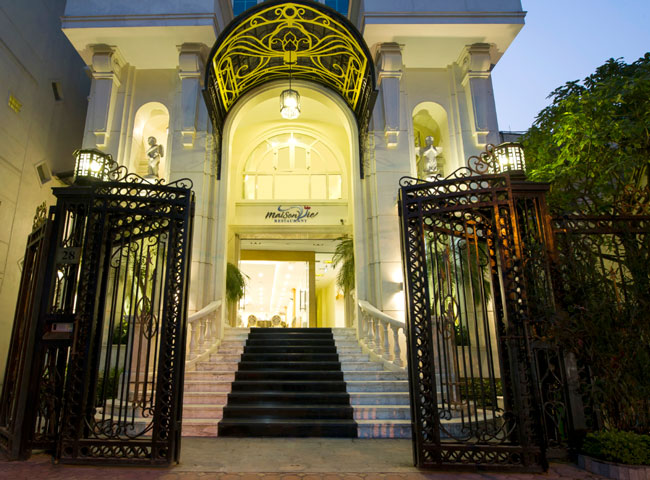 Fitting to our observations, the restaurant is divided into three levels: the first floor was designed with a large room and an outdoor dining area, the second floor had four private rooms with cozy interiors, and the third floor featured a ballroom with a large stage which would be suitable for an elaborate and extensive meal.

The moment we walked in, there wasn’t just the flavors of margarine being cooked that appealed, but also an interesting medley of items displayed on certain levels; ornate ceramic vases were placed alongside vintage typewriters. Most of the guests were foreign groups, each mixed with a couple of local Vietnamese, just like us.

Since we had eaten at Maison Vie a couple of times before, we knew diner can choose typical French dishes from the a la carte or its tasting menu, which received piles of praises from our previous customers. The exquisite Burgundy Snails, Foie Gras, and pan-seared Black Cod with lobster sauce are just a few of them.

Our feast was on a Tuesday night, but the restaurant was almost full. A member of our party, as a big fan of Anthony Bourdain – who said the good stuff comes in on Tuesday, articulated before ordering that ‘it seemed we came in the right place at the right time’!

For starter, we all had French onion soup. The soup was thick and loaded with flavors. Then three of our party tried the tasting menu, while the other four jumped up for the a la carte. The meal went smoothly along with two bottles of Santa Carolina’s Vistana, and we were all completely delighted with our dinner. 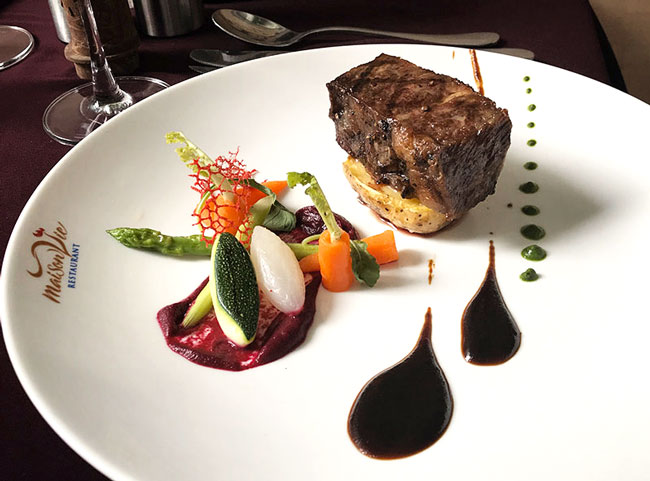 The tuna carpaccio, included caviar and beautiful egg yolk, was lightly cooked in citrus and drizzled with with sesame vinegar and speckled with black sesame seeds. It was just thicker and more flavorsome than what we’ve tasted elsewhere.

We found the buffalo steak a tad hard, but that could be the nature of the meat – something to consider if you prefer more tender cuts. We also had the burgundy snails in garlic butter, the escargot was well prepared and tasty – worth being the establishment’s specialty. Set off right by the bubbly. 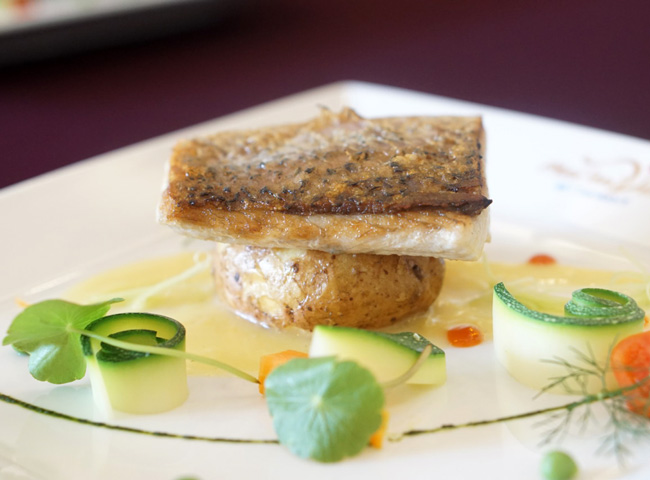 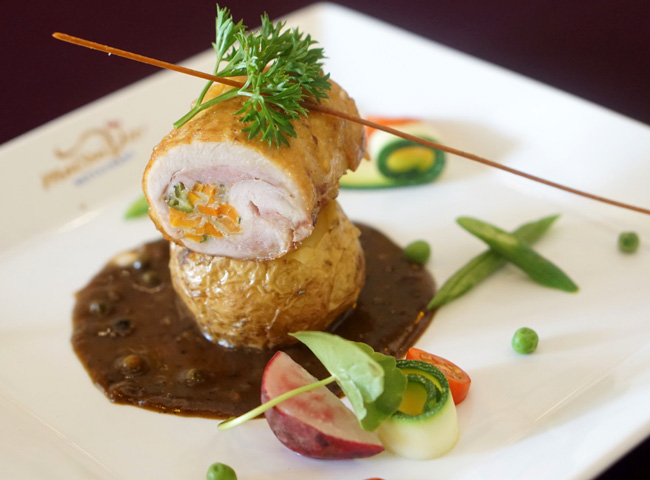 The roasted seabass with crusted chorizo and roasted lamb chops with rosemary were recommended by our party members who ate them. We ourself loved the fried duck leg served with calamansi sauce and fried potatoes, and the pan-fried foie gras was good, we just wished it had a bit more mango sauce. 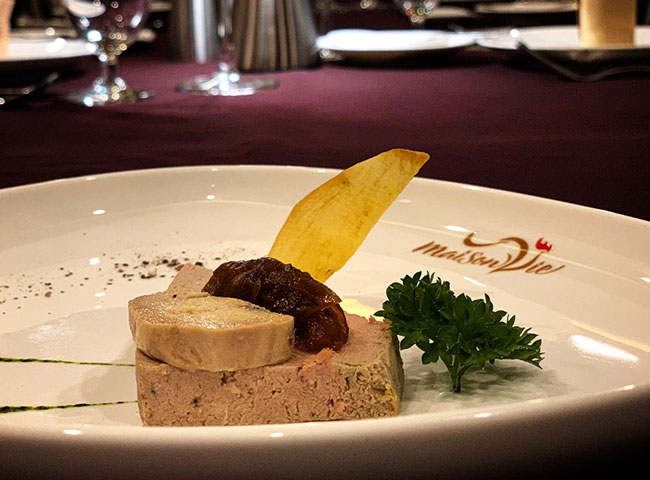 The slow-cooked short ribs, made with American beef was said to be supper tender, succulent, and covered in their signature sauce. The dish takes some 72 hours to prepare, it’s made from nothing other than meat glaze, foie gras, salt and pepper, and yet is incredibly rich.

The red wine we had, a Cabernet Sauvignon- Merlot mélange, was a whack of virtuoso, and the 2017 vintage was just old enough to drink with appetite. Merlot ages quickly to taste like a mellow and well-aged wine, while the Cabernet has depth, full body, aroma and finish. Together, they were like heaven in a glass, those Vistaña were like – the nectar of saints.

Our dessert was another amazing show; from profiteroles with vanilla ice cream and hot chocolate sauce, to cheese platter served with walnut bread, and to well-executed delicacies such as crepes Suzette flambeed with grand Marnier. They were all wonderful ways to finish the meal at a high note!

At the nearly end of our dinner, the French chef, Mr. Thierry, came out to say hello to our table and answered some questions we had about our meal. He met a Vietnamese wife, and so living in Vietnam. We all thought it was a nice touch by the restaurant, forgot to take a photo.

The service was a little slow but understandable, the restaurant was very busy with both group tours and business people, but staffs were very courteous and attentive. Our server spoke great English to explain the dishes and accommodate our group. They were even helpful to split the bill for us, since we all wanted to pay for our parts with credit cards.

Would we recommend Maison Vie to Hanoi visitors? Absolutely! Because, it was great value for our dining experience. It’s always wise to make a reservation and ask for a quiet table if you’re coming with a small group, as some tour companies have their group’s welcome dinner there.

We often gossip with our friends that if a trip to Paris isn’t in the cards for them yet, they can still find exceptional French food throughout Hanoi. Some of these top French restaurants are indeed helmed by chefs from France, leaving alone that Vietnamese chefs also reached the heights of French cuisine. Clearly, Maison Vie Restaurant is one of those.

Join Flavors of Hanoi’s peronal foodie tour guide on our daily walking Hanoi food tour, and explore the best of what the city has to offer. Follow us on Instagram and Facebook to keep updated on what’s new and what’s interesting in Hanoi. 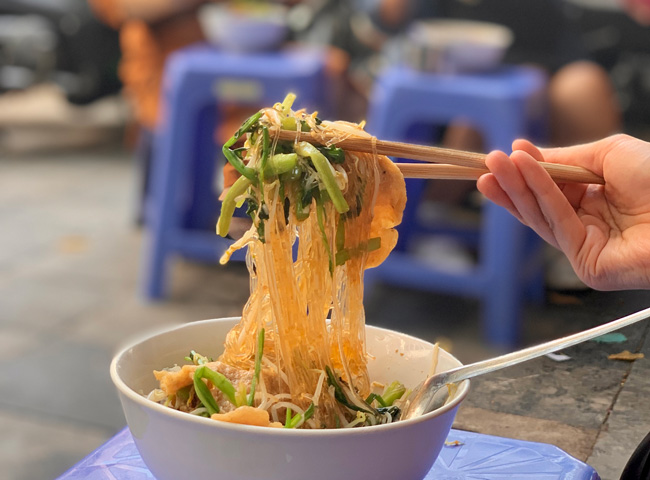 5 Most Popular Street Foods in Hanoi 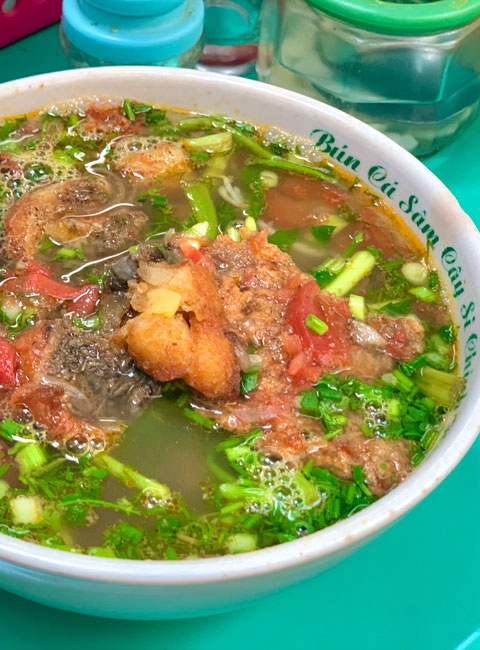 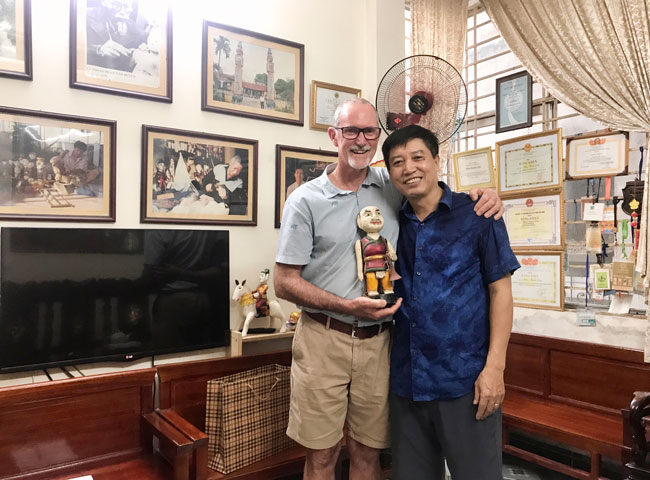 Get To Know About Vietnam Water Puppetry 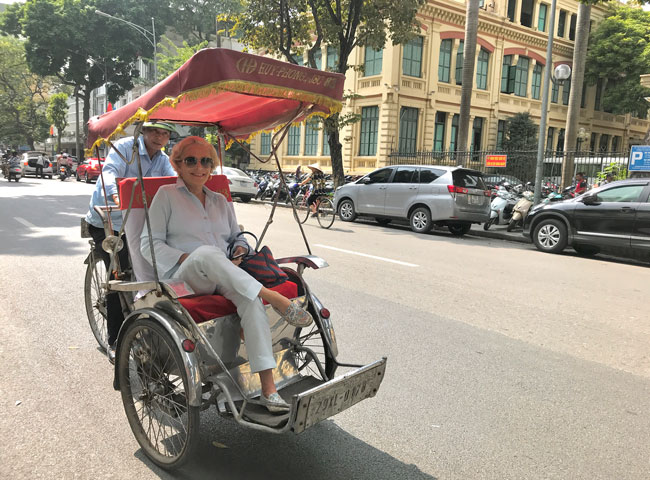 A Glimpse of History of Rickshaw and Cyclo